Parks without Borders: A 4-day Trekking between Switzerland and Italy

From 8th to 11th September with the Park Official Tour Guides

The traces of the heritage made of history and military archaeology at the border between Italy and Switzerland become the occasion to carry out an Italian-Swiss trekking to discover Val Grande National Park, Bolle di Magadino Nature Reserve, and the area of Locarno, bound to become the second Swiss national park.

The trekking called "Parchi senza confini" (Parks without Borders) is part of the program of events "Parchi 2011", from "Riserve del Re" to "Parchi per tutti", a series of initiatives to celebrate the 150th anniversary of the Unification of Italy which started in February and will end in October, whose thread is the theme of the "border". "Border which is no longer considered an enclosure, neither for the States nor for the parks that - for instance, the frontier parks - work for the creation of transfrontier parks", explains the Park President Pier Leonardo Zaccheo.

The trekking is organized and carried out with the collaboration of the Group Official Tour Guides of Val Grande National Park (Valgrande soc. coop.).

PARTICIPATION FEE: 25 Euros per day/person, 80 Euros if you participate in the 4 days (the participation fee must be considered as a contribution for the meals - except the packed lunch of the first day - accommodation, tour guide service, transfers with luggage transport and organization).

The program is available at the page: http://www.parks.it/parco.nazionale.valgrande/man_dettaglio.php?id=11285 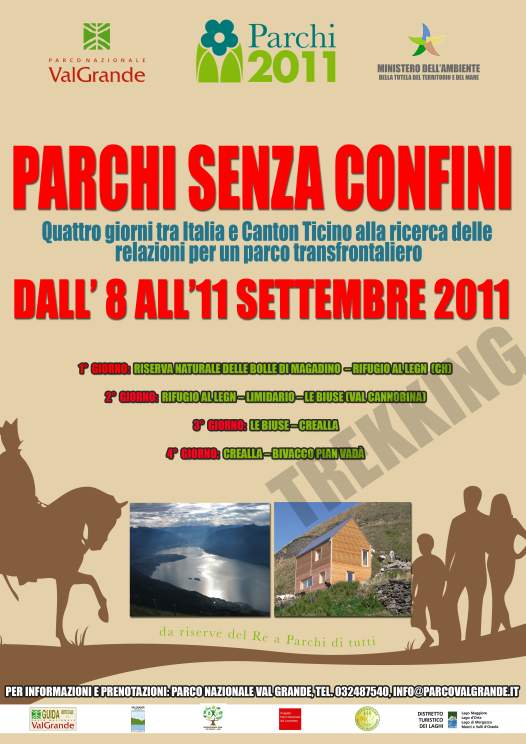