A fire broke out yesterday in Val Grande National Park, in the forests situated above Colloro in the Curt Alp. Firefighters, troops belonging to the Territorial Coordination for Environment of the State Forestry Corps, together with the volunteer members of the A.I.B. (Volunteer corps for the fire prevention in the woods) promptly took action to bring the flames under control and limit the damages to the forest heritage.

For this reason, be informed that due to precipitation scarcity it is forbidden to light fires outdoors all over the regional territory, as the Region itself established with the Decision N° 299 of 6th February 2013 to forbid the lighting of fires, the setting off of mines, the use of electrical or flame devices to cut metals, the use of engines, stoves or incinerators generating sparks or embers, smoking or any other action which can cause an indirect or direct fire risk. 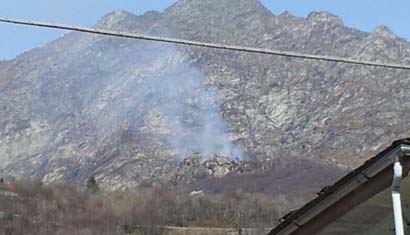