From the rock engravings to the logo of the Park

The first reports of rock engravings relating to the Val Grande date back to 1985, with the publication in the book "Val Grande Ultima Paradiso" of the boulders covered in Alpe Prà and Alpe Sassoledo. Subsequent contributions from local researchers allowed the identification and documentation of an increasing number of engraved rocks. The most common engravings in Val Grande are the cup-marks, executed on rock and with variable dispositions, often joined by channels. There is no lack of other types of engravings such as tree-like, cruciform, vulvar, and anthropomorphic symbols, all signs dating back to more or less recent historical periods.

In this context, the prospecting of the Val Grande territory was aimed at relocation, in the search for new engravings and their census, with new integrated methods and approach. All is based on the initiative of the park authority, during the years 2012-13, and which is reflected in the third volume of the series called "Messaggi sulla pietra. Censimento e studio delle incisioni rupestri del Parco Nazionale Val Grande". (“Messages on the stone. Census and study of the rock engravings in the Val Grande National Park”).

The Sassoledo Alp is located on the slopes of Pizzo Marcio, along one of the paths that from Verigo di Trontano lead to Val Grande, through the Colma di Basagrana, one of the most panoramic points in the upper valley. The engraved boulder is located near the lower Sassoledo Alp and has on its surface some petroglyphs of various types: tree-like, cup-marks, stars, dates and letters. Other incisions are visible behind the upper Alp, along the wall that rises along the ridge that leads to Pizzo Marcio.

The petroglyphs of Sassoledo have almost all been engraved by repeated rubbing of the rock, and therefore they appear filiform and not very deep. There are numerous cruciform and cup-marks, symbols of Christianization with various typologies, which often served to re-sacred rocks already engraved in pre-Christian times.

The tree-like symbols present on the rocks of Sassoledo have inspired the logo of the Val Grande National Park. It was a graphic from Luino, Fabio Bellato, who elaborated it. Many are the reasons that led to this choice: the fact that the tree-like symbols could also represent, in a stylized form, the man, great protagonist of the history of this valley. This tree has always played a leading role in the economy of the Val Grande (see the deforestation of past centuries) and still has it at an environmental level, with nature becoming the undisputed master of these inaccessible valleys.

The "boulder altar" of Prà Alp

The Prà Alp is a suggestive balcony overlooking the low Val Grande and the far away Lake Maggiore, a body of water on which the Borromeo Islands seem to float.

Just below the “Casa dell’Alpino” refuge, to the right of the pasture ruins and in a dominant position over the valley, a stone table draws attention for the presence on its surface of about thirty cup-marks, some of which are joined by channels. The position of the boulder, facing the rising of the sun, could confirm its purpose: naturalistic cults for which life depended on the Sun, the development of both vegetal and animal and therefore also human nature. Other theories have been expressed on the meaning of the cup-shaped incisions of the Prà Alp. It is assumed, for example, the possible representation of celestial constellations and in particular of the Great Bear or of an ancient topographical map that would indicate boundaries or paths. 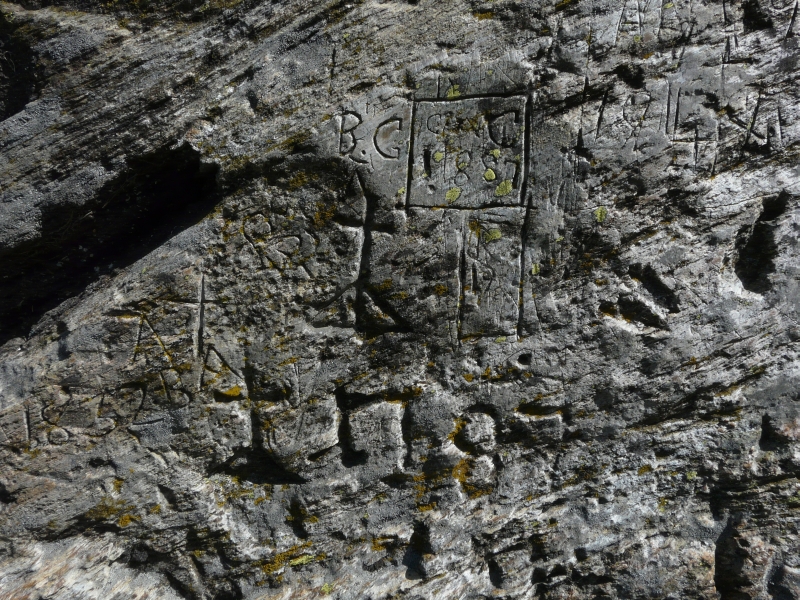 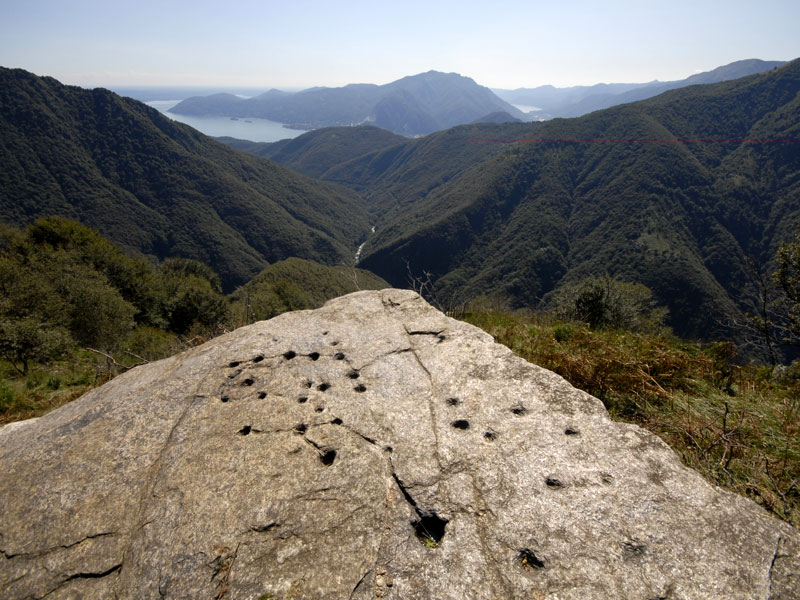 Boulder with cup and ring marks and Maggiore Lake in the background
(photo by: Archivio Parco Nazionale Val Grande) 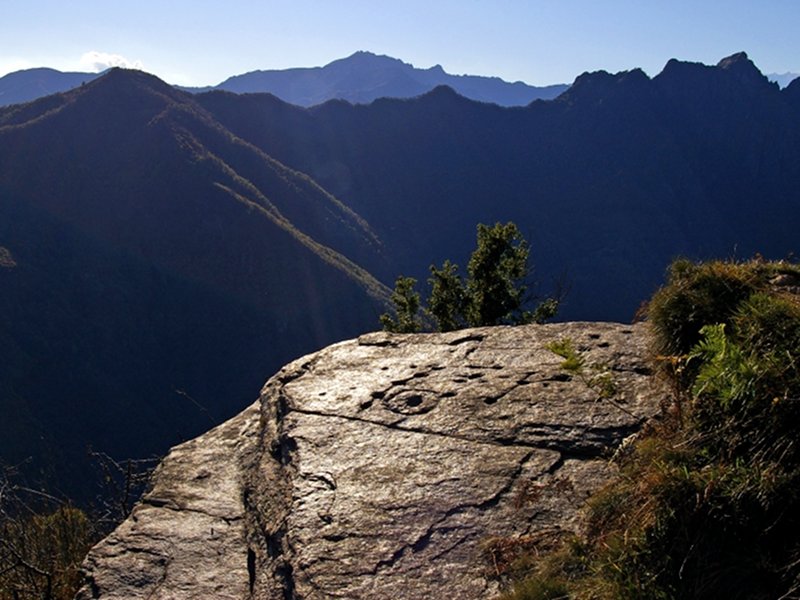